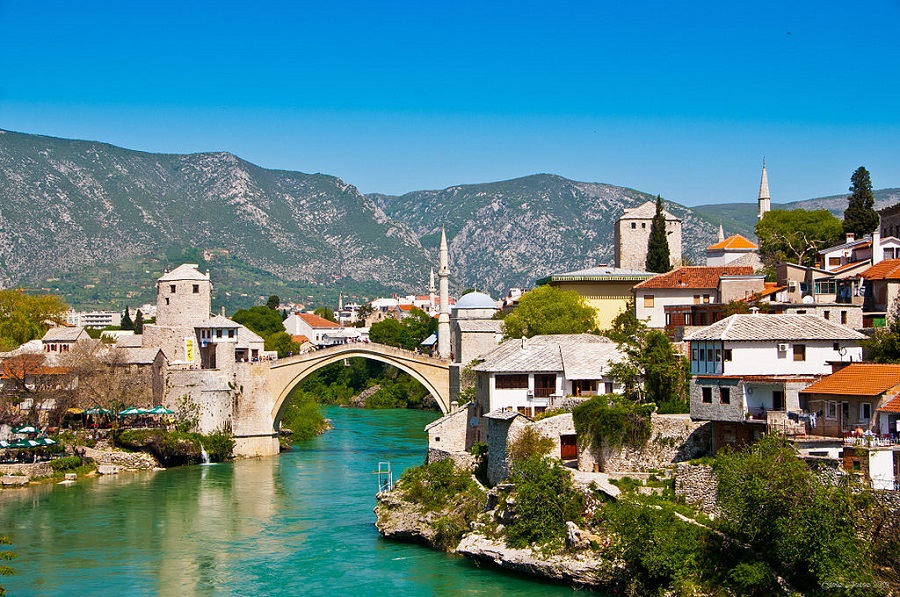 Mostar – The old bridge in Bosnia and Herzegovina

Bosnia and Herzegovina, or just commonly known as Bosnia or BiH, is a medium sized country in the Central Eastern Europe. The country broke out of the former Federal Republic of Yugoslavia and declared its independence in 1992, which started with the civil war. This period was finished in 1995 when the siege was lifted.

Currently, Bosnia has a GNI per capita of US$4,770, placing the country in the upper middle income category. The economy is recovering from the time of the siege though it is not as strong as it was before 1992. It is gradually regaining the balance. The metal product industry was highly developed before the war and it brought a lot of foreign investments into the country which was also hosting a large number of industrial firms. Currently the capital city, Sarajevo, and Mostar are the fastest developing cities in Bosnia and Herzegovina, and their best performing industries include telecommunications, metal and aluminium industries.

The biggest contributor of the GDP is the tourism industry. Unfortunately, even though the country’s economy has improved after 1992, due to the financial crisis in 2008, the overall economy is not developing very fast at the moment. This is also triggered by the lack of governmental and economical reforms, specifically that the privatization process has stagnated. Currently, Bosnia’s financial and investment freedom is scored at 60.0 which is also due to Bosnia and Herzegovina’s commitment on the European Union reforms from 2015, however it has room for improvement. Further, the economy is not regarded to be competitive relative to the region, with the export being only 30% of the GDP. On the other hand, the import of consumer goods and the investments have improved by 5.7% and 19.8% respectively.

Investment to develop the country

Taking the above into consideration, Bosnia and Herzegovina has large and countless opportunities for foreign investors as the infrastructure and most of the industries require investment and development to further improve. The World Bank specifically mentions that the trade within the region and with the European Union, and the agriculture industry are the most promising sectors. The foreign direct investment in Bosnia and Herzegovina in 2014 was approximately 290 million Euros, coming mostly from the EU countries such as Serbia, Austria, Switzerland and UK. The country’s GDP real growth rate in 2015 was 2.1%, up from 1.1% in the previous year. Additionally, the country has a low inflation rate of below 5% per year on average. Another major advantages are that the labour force is highly skilled, well educated, and inexpensive, and its location which is close to the European Union.

Setting up your own company

The corporate tax is as low as 10% so it is very attractive to register your company in Bosnia and Herzegovina. The incorporation process can be very bureaucratic, as it involves a tax statement from the Bosnian Tax Authorities confirming you have no debts and a notification of the company to the Cantonal Inspection Authority. For a more detailed incorporation process, you can see the steps on BiH webpage. Healy Consultants Group PLC has been incorporating companies in developing countries all over the world for over a decade. We can assist you to set up your own business in Bosnia and Herzegovina as well, ask us how.

Image attribution: By CJ [CC BY 2.0], via Wikimedia Commons