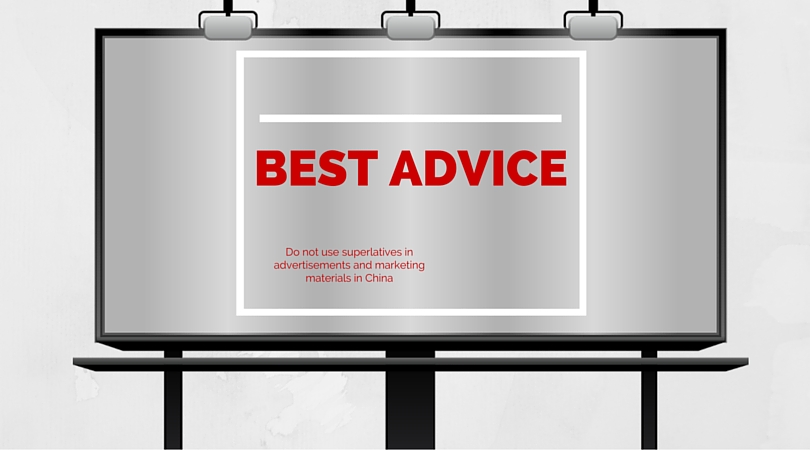 In China, you will be penalized for using superlatives in your advertisements

With effect from the beginning of last month, China has instituted a new law on advertising that restricts many marketing practices. The most widely-publicised of these restrictions is on the use of superlatives, for example claiming to have the “most advanced chip ever in a smartphone”. Fines for violating this rule start at 200,000 RMB (~US$31,500) and are capped at 1 million RMB (US$157,000), with Chinese smartphone manufacturer Xiaomi being one of the first high-profile companies investigated for such a breach. In this case, the phone maker used superlatives such as “first-class”, “the most advanced” and “the best”.

These tactics have long been common practice in the West, to the extent that both the law (under a concept known as “puffery”) and the public recognize the claims as essentially meaningless bragging. Some terms like “highest”, “best” and “national-level” are expressly listed by the law as being prohibited, with other cases being adjudicated by the State Administration of Industry and Commerce. This agency is also responsible for company incorporation in China.

Other practices covered by the new regulations include failing to declare that an advertisement is promotional material, and rules around false advertising more generally have been tightened.

Some catch-up, some leapfrogging

In a move that brings China more closely in line with Europe and the US, the country has largely banned the advertisement of tobacco products. Another change already seen in many other countries is a prohibition on unsolicited advertising emails like that in the US CAN-SPAM Act. Interestingly, this also extends to the real world by banning unsolicited promotional material being sent to private addresses. In the UK, for example, physical “junk mail” is still widely used (and helps to finance the country’s postal service).

As health foods can no longer contain medical treatment claims, might the new advertising rules begin to affect traditional Chinese medicine? This is unclear, as the English-language writing on the subject has not covered this point.

Selling your products in China

If your firm is looking to market and sell its products in China, visit Healy Consultants Group PLC’ website to learn more about starting a foreign-owned Chinese company and how we can help you to do business in the country. Alternatively, contact our experts for advice on doing business and complying with local regulations; email us at .