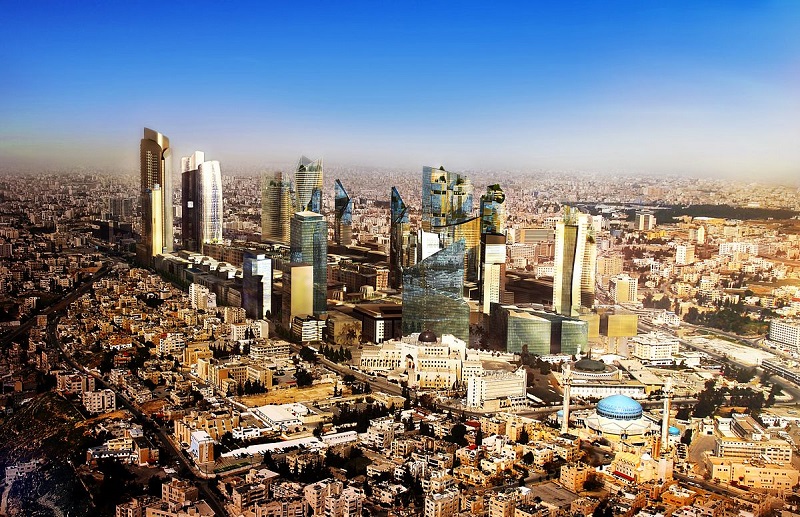 Amman: Capital of Jordan
Photo credit: “ABDALI-Sunrise” by The original uploader was Joeyzaza at English Wikipedia – Transferred from en.wikipedia to Commons by Producer.. Licensed under CC BY-SA 3.0 via Commons.

As the Syrian Crisis continues to drag on, Jordan is doing its best to manage the on-going influx of refugees. There are currently over 600,000 people from Syria and Iraq and surrounding countries taking refuge in Jordan. In the news in the past week are details of a new school being built in Jordan’s 2nd refugee camp. Jordan has made healthcare and education available to the refugees as best it can. According to UNHRC, Jordan also provides security to the camps and the environment is relatively favourable under the circumstances. Understandably, the refugee situation puts a lot of strain on the country’s infrastructure and socio-economic relations. Unemployment is up 4% from last year with lower skilled Jordanians taking the brunt of the unemployment situation. Refugees are taking up jobs in construction and other unskilled labour areas despite the government trying to clamp down on this.

Despite the refugee situation and turbulence going on in surrounding countries, Jordan has remained a war free zone for the past several decades and provides a politically stable and favourable environment for business set up. Two agreements in particular make it favourable for American investors; The Qualifying Industrial Zones Agreement & The US-Jordan Free Trade Agreement.

This was an agreement established by congress in 1996 which allows products manufactured in Jordan, Egypt, Israel, The Westbank and Gaza to be exported into America duty-free. Initially, the agreement was thought to help with improving relations between the US and the Middle East but it has proved economically very successful for both Jordanian and US businesses. Exports from Jordan have increased 20 fold since the agreement was put into operation. There are 5 QIZ zones in Jordan and they have been a resounding success in creating prosperity in their areas. Goods produced in the QIZ zones do have some qualifying conditions such as some Israeli input into their manufacture and the requirement that they have 35% of their value added in the zone e.g. material or labour costs. Additionally, the product must be a new or different product grown, manufactured or developed in the zone.

Signed in 2009, the US-Jordan Free Trade agreement has significantly improved economic relations between the US and Jordon. Jordan has become the go to country for American investors to set up in the Middle East due to the number of advantages that these free trade zones confer. Many of Healy Consultants Group PLC American clients opt to set up in the FTZ areas in Jordan as they can have 100% ownership without the need for a local partner. Jordan has 12 free trade zones which offer the following advantages: corporate tax rates of only 5%, no VAT, no custom duties on goods imported for use in product manufacturing and salaries of foreign employees are exempt from social security and payroll tax.

If you are looking to take advantage of the agreements above and invest in Jordan, then Healy Consultants Group PLC will be happy to help you select the optimum structure so you can establish your business in a tax efficient manner. Contact us at