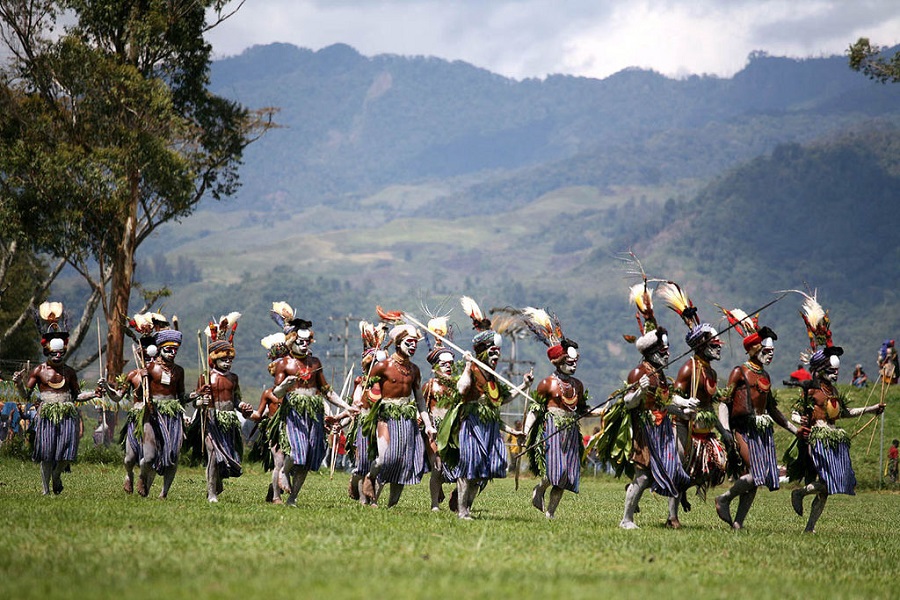 One of the last remaining countries in the world, untouched by modern life, Papua New Guinea((PNG) is home to 7.6 million people of over 1000 indigenous groups with approximately 800 languages and cultures. 80% of the population live in rural isolation and rarely see each other or the outside world. The other 20% live in the capital Port Moresby and other towns Lae, Mount Hagen, Goroka, Madang.

In rural areas, trade is usually non-monetary and livelihood centres around subsistent agriculture. In the cities, the language of business in English and the currency is the Kina. PNG’s economy has been steady and growing since 2011 according to the world bank and relies mainly on agriculture, forestry and fishing but the mining and natural resources (oil and gas) extraction sectors are now getting well established and are a good opportunity for foreigners looking to invest.

While PNG has an unsettled political past it has achieved some stability in recent years through the election of Peter O’Neill as Prime Minister in 2012. While the economy has steadily grown there remain some significant challenges that the country faces to keep moving in the right direction. A report by the World Bank in April 2016 put it well “Translating macroeconomic performance and revenues from the extractive industry into strong, tangible improvements to living standards for all Papua New Guineans remains the key challenge for the Government of PNG, yet other challenges are also immense. Improving public financial management, efficiency of public spending and service delivery, raising the performance of the civil service, and improving transparency and accountability in budget management will be crucial in converting resources revenue into inclusive growth and, consequently, a genuine improvement in the livelihoods of ordinary Papua New Guineans.”

The OEC report shows top exports of PNG in 2014 worth $8.62B include Gold, Petroleum Gas, Crude Petroleum, Rough Wood and Copper Ore. Its top imports valued at $4.92B are Refined Petroleum, Crude Petroleum, Excavation Machinery, Delivery Trucks and Other Edible Preparations.

Oil and gas are likely to provide exciting opportunities for investors in the future. Exxon mobil already have already led a PNG LNG (Liquified Natural Gas) plant in successful operation since 2014 and there are two more big projects reported to be in the pipeline. The other two big players looking to near future investment are Total and Twinza for an offshore development.

While doing business in PNG is not considered easy (it’s ranked at 145 out of 189 economies in ease of doing business by the World Bank), it certainly has advantages in its location relative to key markets of Australia, New Zealand and Asia. It is also a cheap place to do business with a young and enthusiastic workforce so it is likely that investors will increasingly look to this rapidly developing economy to invest their monies.