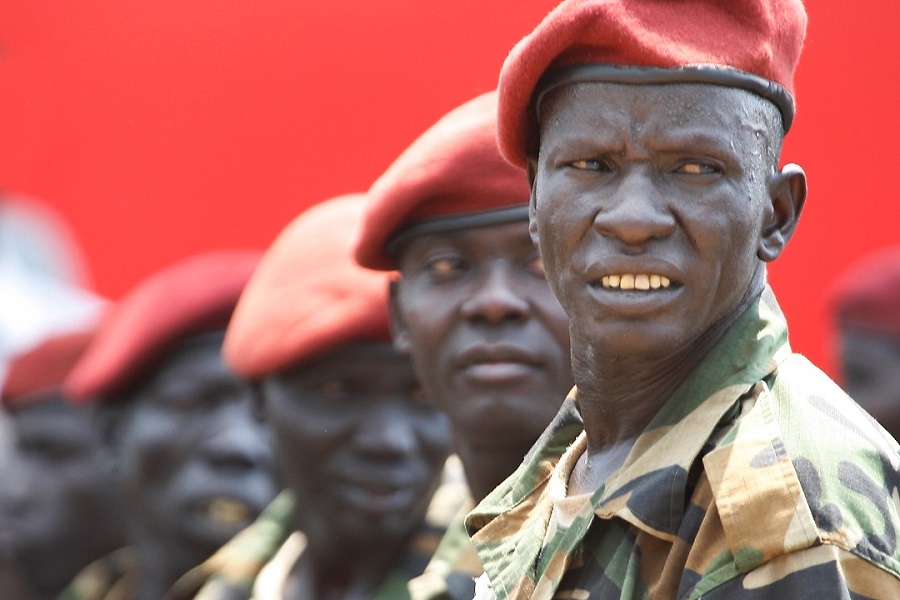 South Sudan’s presidential guard await the arrival of foreign dignitaries invited to participate in the country’s official independence celebrations in the capital city of Juba.

The Republic of South Sudan is the world’s youngest country in 2011 seceding from Sudan after a referendum. The country was involved in a 20-year civil war between the northern government in Khartoum and the South. This conflict and poor development and infrastructure have made it difficult for new government to maintain stability and to welcome foreign investment. Alongside poor education and health indicators, more than 50% of the population live in poverty with basic food shortages.

South Sudan has vast oil wealth but this remains generally untapped. Oil accounts for almost all export revenue and over 60% of GDP. Analysts estimate oil reserves will run out around 2035. GDP itself stands at around $1,100 (2016) as 80% of the population are still engaged in unpaid, subsistence farming.

Any developmental gains since independence have been setback by a two-year conflict starting in 2013 between different factions. Government revenue set aside for development has been diverted into military expenditure. This brought in 10 African states on various sides and damaging GDP by up to 15%.

While peace has been restored and both sides are back in the government, the division line is clear and stability is unlikely to hold. The government needs stability and to focus on using the oil wealth to drive development into the country and make it a more favourable country for foreign investment. But with the 84% devaluation of the South Sudanese pound, rising food costs and low foreign exchange reserves, the country faces an uncertain future if the main business sector of oil will not get developed.

In conclusion, the country needs a strong hand to take hold of the economic development and understand that foreign investment is beneficial to the country. You as a foreign investor should know that setting up a company takes around 5 weeks and the corporate tax rate comes up from 10% to 20%. If you will be tapping into the natural resources of the country, then you can have a definite success story.