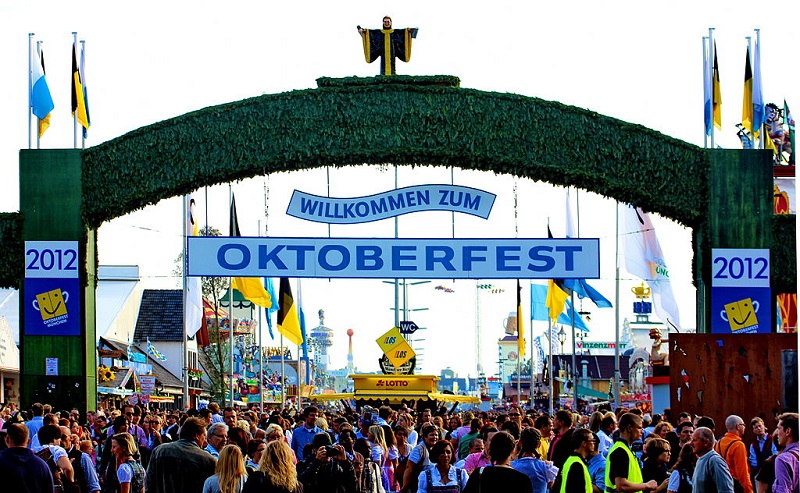 Haupteingang Oktoberfest 2012. By Usien (Own work) [GFDL or CC BY-SA 3.0], via Wikimedia Commons

Germany is known for many things around the world, from its cars and engineering to its sausages, cheese and beer. German beer is closely linked with Oktoberfest, the original incarnation of which is in the Bavarian city of Munich, with the concept now popular around the world.

More than 6 million people descend upon Munich, Germany’s third-largest city, each year to take part in the festival. With crowds of this magnitude, the festival has a huge economic output all of its own, driving hotel stays, restaurant sales, brewery receipts and 12,000 jobs. Six Munich-based brewers supply the festival with the 7-8 million litres of beer sold in the iconic 1-litre Ma? glasses during Oktoberfest each year.

That beer is the centre of an estimated €1.1bn of revenue generated by Munich, with €320million of that spent on the festival grounds alone. Slightly less than that is spent on hotels and hostels, with the remainder being spent around the city. But if you look at the amount of beer sold per visitor, it appears that German beer is more of an accessory than it is a big seller itself: despite an upward trend in per-visitor sales over the years, the average festivalgoer will have barely more than a single Ma?.

The picture is similar in the export market, where Germany exports beer by value than it does hard liquors like Jägermeister. Both exports account for only 0.1% of German exports by value, selling US$1.29bn of beer abroad in 2012 against US$1.31bn of hard liquor that year.

Several factors likely lie behind this low figure for exports of German beer:

To learn more about the German economy and doing business in the country, visit our page on the advantages and disadvantages of starting a company in Germany. Alternatively, contact our incorporation and licensing consultants at